This is how I looked after my first day of trying contact lenses for the first time, which I will be wearing for the wedding so the make-up doesn’t go to waste.

There was no prep time, I just told them I was interested in contacts, so they sat me down, gave me a pair and a mirror and told me to put them in. Many tips from different employees, a lost contact, and what felt like a hundred tries later, I finally got them both in… then they told me I had to take them out, too.

After a gajillion more tries, a watery nose and irritated eyes, they told me I had to put them in AGAIN. ._.; I guess so I could have them on for the day?

I think I took like 40 minutes altogether doing all that.. by the end of it I was feeling like maybe contacts wouldn’t work out. But now I’m on my 4th day and it’s gotten much easier.. putting them on still takes like 5-10 minutes and a few tries, but taking them out is super easy.

Here’s hoping that by the wedding day it’ll be a breeze! 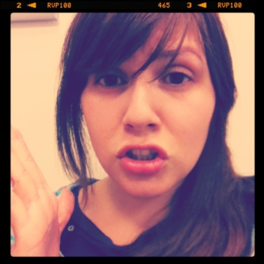